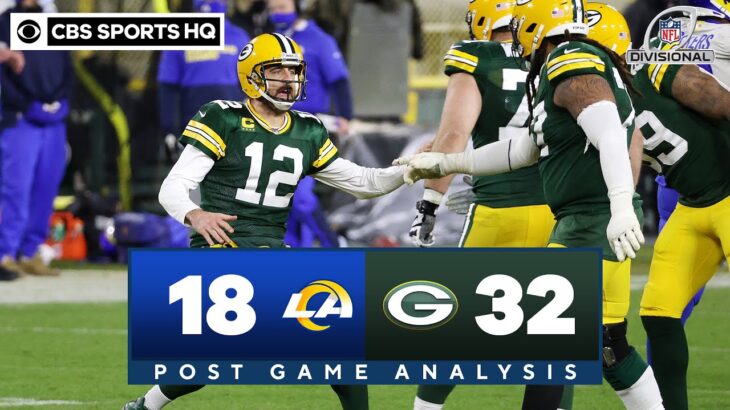 It began as a matchup in which the Los Angeles Rams went from underdog to a legit threat, but the Green Bay Packers kept throwing body blows en route to a 32-18 victory to stamp their ticket to the NFC Championship game for the second consecutive season and the third time since 2016. Aaron Rodgers had his offense cooking as usual on the opening drive of the first half, and even got his usual mental error from the opposing defense that awarded him a free play that put the Packers in the red zone. They ran into a brick wall immediately thereafter though, when the Rams defense clamped down to force a field goal instead of what felt like an inevitable touchdown.

From there, it was a mix of overhand rights by the Packers countered by one-two combos from a Rams team that refused to lay down and go to sleep — until Rodgers ultimately put them to bed against their will.

Despite still nursing a broken thumb, Jared Goff came out of the gate firing with accuracy and rhythm on the following drive for the Rams, but the promising drive was ended deep in Packers territory after an ill-timed and unproductive wildcat call — followed by a stopped run on third-and-short and a penalty on fourth-and-1 that forced them into a field goal of their own. They’d pay for those mistakes, with Rodgers again leading the charge but this time getting his touchdown by way of a short toss to superstar wideout Davante Adams early in the second quarter. One sack by defensive end Za’Darius Smith later and the Packers had the ball once again, punishing the Rams for another long drive — these surely beginning to wear on the Rams defense — to land a second touchdown, this time with Rodgers taking it in himself to stretch the lead to 13 points.

Refusing to lay down and die, however, Goff engineered a nine-play, 75-yard touchdown drive in the final two minutes of the first half to cut their deficit with the help of rookie wide receiver Van Jefferson. Aaron Jones punched the Rams in the face to start the third quarter, but the Rams answered with some trickery from running back Cam Akers and timely defensive stops, only to ultimately become the latest victim of Rodgers being Rodgers in the clutch — by way of a 58-yard touchdown late in the fourth quarter to close the casket on the Rams’ season.