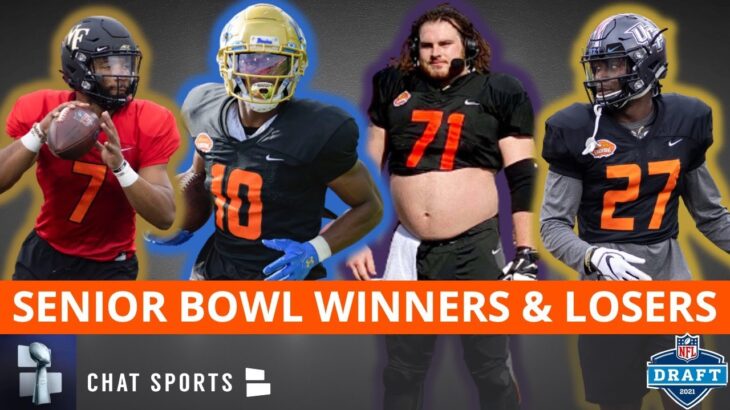 The 2021 NFL Draft process is ramping up, with the Senior Bowl playing a massive role. The 2021 Senior Bowl (and the critically-important practices) is now in the books and NFL Daily host Tom Downey is here with a look at some Senior Bowl Winners and Losers. Those include some NFL Draft Sleepers, risers and fallers as we hear the NFL Draft rumors start to grow closer to the 2021 Draft.

Feliepe Franks was the Senior Bowl Game MVP, but was inconsistent all week. Michael Carter arguably was even better in the game and definitely was at practice. Defensively, a pair of linemen helped themselves in Cam Sample and Osa Odighizuwa

Some of the top NFL Draft prospects at the 2021 Senior Bowl were wide receivers. There were lots of winners in that position group, but D’Wayne Eskridge, Josh Palmer, Dez Fitzpatrick and Demetric Felton impressed the most of anyone in another strong year for WR prospects.

Some small schools players really impressed and helped their draft stock this week. Quinn Meinerz might be the biggest winner of the Senior Bowl, while UCF S Richie Grant might be the #1 defensive winner.

The 2021 NFL Draft process is underway with postseason All-Star games. The NFLPA Bowl and the East-West Shrine Game were canceled along with the NFL Combine, so the Senior Bowl meant even more this year. So which prospects are helping and hurting their draft stock? Most of the players in these games and practices are Day 2-3 prospects, but there are still plenty worth discussing.

But the NFL Draft isn’t only positive, sadly. There were some players who hurt their draft stock this week, like Marvin Wilson, Deonte Brown and Jamie Newman.

Our NFL shows can be watched live on the Chat Sports Facebook page: https://www.facebook.com/chatsports