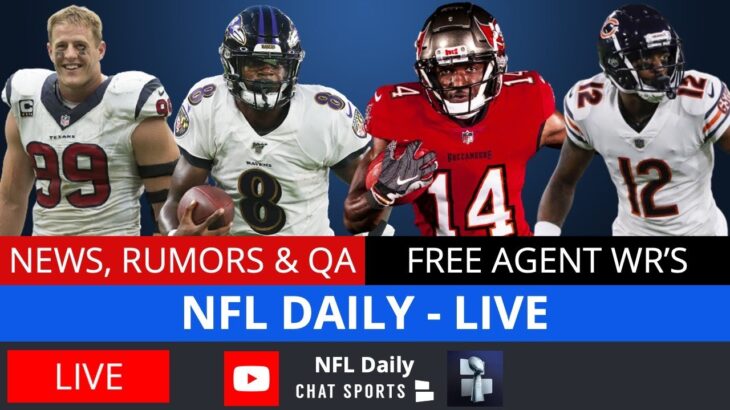 NFL Rumors and news coming at you LIVE today! JJ Watt has picked his new NFL team, as he’s agreed to a deal with the Arizona Cardinals! That’s the NFL News today, but there are also NFL Rumors on a Deshaun Watson trade, Lamar Jackson, Alex Smith, Teddy Bridgewater and a 17-game NFL schedule for 2021. Plus, host Tom Downey takes a look at the Top NFL Free Agents at Wide Receiver!

NFL Daily is made possible by Manscaped! Use code CHAT at https://www.manscaped.com/chat to save 20% and get free shipping!

NFL news focuses on the JJ Watt to the Arizona Cardinals signing! Plus, is the 17-game NFL schedule coming for the 2021 season? And if so, what are the matchups?

NFL Rumors focus heavily on quarterbacks today, with rumors surrounding Lamar Jackson, Deshaun Watson, Alex Smith and Teddy Bridgewater. It appears that the Washington Football team is going to cut Smith. Could the Panthers do something similar with Teddy Bridgewater? There are NFL trade rumors around him, but it appears that teams prefer him as a backup. Will the Texans actually trade Deshaun Watson? And is Lamar Jackson getting a contract extension from the Baltimore Ravens?

Get yourself some St. Patrick’s themed-NFL gear on Fanatics: https://www.chatsports.com/StPatricks

We’re LIVE every Monday and Wednesday, so subscribe so you don’t miss out on our live shows & Mailbags: https://www.youtube.com/chatsportstv?sub_confirmation=1