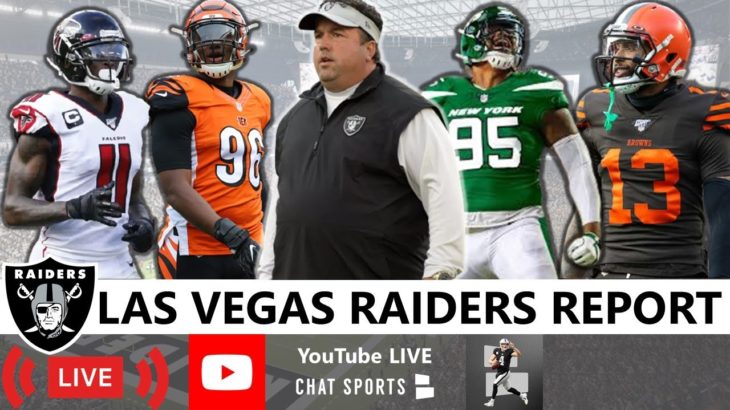 Raiders rumors, NFL News, Trades and free agency coming at you LIVE here on the The Las Vegas Raiders Report hosted by Mitchell Renz. Jon Gruden doesn’t seem like he is going to fire Paul Guenther but he does seem like he wants to make some changes. Could the Raiders make a trade for a player like Julio Jones, Carlos Dunlap or Quinnen Williams at the NFL Trade Deadline? Or could the Raiders sign a free agent like Earl Thomas, Ha Ha Clinton-Dix, Eric Reid, Cameron Wake? Plus the Raiders vs. Browns NFL Week 8 Preview breaking down both teams offenses and defenses. Who has the advantage entering this AFC Matchup? Some breaking news in the NFL, The Detroit Lions have traded for Cowboys DE Everson Griffen!

Raiders vs. Browns is a game every Raiders fan should be interested in! For details on picking the Raiders over the Browns like Mitchell Renz discusses – email us at raiders@chatsports.com!

Paul Guenther needs to be fired! If you agree, get yourself a FIRE PAUL GUENTHER Shirt here: https://www.chatsports.com/FPG

Panda Supps is sponsoring today’s show! Get 45% OFF everything with promo code: FPG (yes it stands for Fire Paul Guenther) here: https://www.pandasupps.com

Las Vegas Raiders will look to bounce back against the Cleveland Browns. Can Derek Carr, Josh Jacobs, Darren Waller, Henry Ruggs, Nelson Agholor get the offense moving with hopefully a fully healthy offensive line back now that Trent Brown should play? The Browns lost Nick Chubb earlier this season and now have lost Odell Beckham Jr. for the season with an ACL tear. Will Baker Mayfield be able to keep up with the Raiders offense? Can the Raiders defense improve at least a little entering Week 8 after giving up 45 points to Tom Brady and the Buccaneers?

Raiders vs. Browns Live Streaming Watch Party will be hosted by Raiders Report host Mitchell Renz here on the Las Vegas Raiders Report YouTube Channel! Make sure you’re subscribed so you can join the fun on Sunday: https://www.youtube.com/raidersreport?sub_confirmation=1

NFL Power Rankings entering Week 8 were released at Chat Sports. The Las Vegas Raiders were ranked at #16 – what are your thoughts?

If you crave more Raiders News and Rumors check out: https://www.chatsports.com/las-vegas-raiders/

Raiders Report can be watched LIVE on Facebook Live on the Las Vegas Raiders by Chat Sports Facebook page: https://www.facebook.com/justwinbabyraiders/