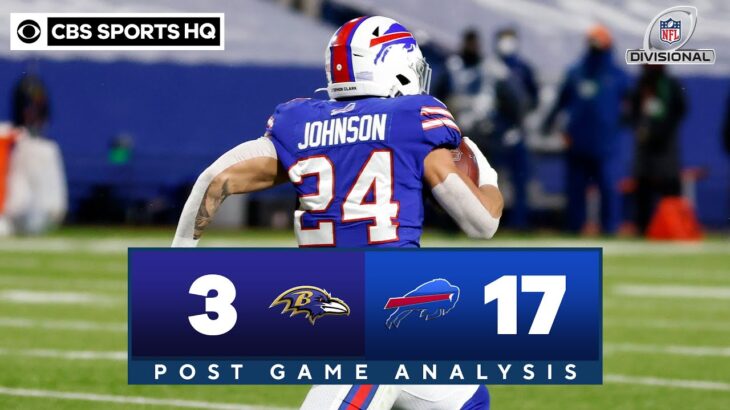 For the first time in nearly 30 years, the Buffalo Bills are headed back to the AFC Championship Game. Matched up with the Baltimore Ravens on Saturday night, the conference’s No. 2-seeded contenders were not perfect in windy Orchard Park. Josh Allen and Co. managed just three points in an erratic first half, and even after Ravens quarterback Lamar Jackson exited in the fourth quarter due to a concussion, the Bills nearly allowed rookie backup Tyler Huntley to pull Baltimore within one score. Still, Buffalo came up big when it counted, with Allen finding Stefon Diggs for the only offensive score of the night and Taron Johnson making NFL history with a 101-yard interception return for a touchdown — easily the most monumental play in a 17-3 Divisional Round victory.

Jackson, who was flagged for intentional grounding on his final play after a poor snap forced him toward his own end zone, struggled to lift the Ravens out of an offensive slump that was apparent from the get-go. Allen, on the other hand, wasn’t nearly as deadly through the air as he’s often been during an MVP-caliber 2020 campaign but managed the ball well enough. The Bills’ defense, on the other hand, really showed out at home, logging two fourth-down stops and neutering one of the game’s top ground attacks to not only lead but preserve the win.