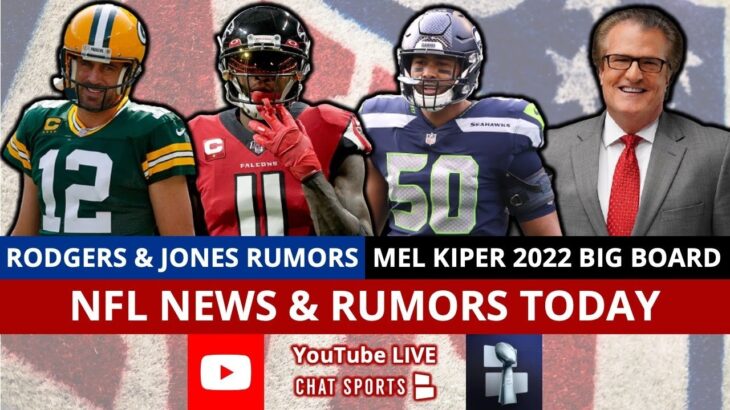 NFL Rumors heated up over the weekend and continue to be attached to some of the biggest names in the NFL like Aaron Rodgers and Julio Jones. Could a Julio Jones trade or Aaron Rodgers trade happen this week? NFL trade rumors remain attached to Jones and Rodgers while KJ Wright free agency rumors pick up steam. We also take a look at Mel Kiper’s 2022 NFL Draft big board. Chat Sports host Tom Downey runs through the latest NFL news and NFL rumors in today’s live NFL Daily!

Will a Julio Jones trade happen this week? Last week ESPN reported that the Falcons have received a 1st round draft pick in a Jones trade offer but people across the NFL voiced their doubts about that. Peter King said he talked with a NFL GM who stated that if that were true, “They’d have made the deal and just said we’ll announce it next week.” The latest teams attached to Julio Jones trade rumors are the Seahawks, Ravens, Titans and Rams. ProFootballTalk reported NFL experts believe that the Tennessee Titans are the favorites to make a Julio Jones trade happen.

Could the Packers be holding on to Rodgers and putting the Aaron Rodgers trade rumors to bed? If the Packers were to trade Rodgers after June 1st Green Bay would save $16.05MM in salary and would take on a cap hit of $21.152MM compared to a $38.356MM cap hit if the Packers make an Aaron Rodgers trade happen before June 2nd. NFL rumors suggest that the Packers would trade Rodgers if they truly believe that he would never play for Green Bay again and wanted to get draft picks and players in return instead of forcing the league MVP to retire.

Did we not get to your NFL Mailbag question? Hit up host Tom Downey on Twitter: Twitter: https://www.twitter.com/whatgoingdowney

NFL rumors are also posted on our website: https://www.chatsports.com/nfl/