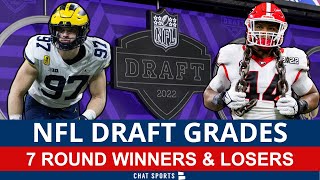 2022 NFL Draft Winners & Losers – Grading all 32 teams. The NFL Draft is officially over & NFL Daily host Tom Downey breaks down the NFL Draft Grades for all 32 teams with their analysis of each team’s picks, including the biggest winners & losers from the 2022 NFL Draft. This year’s NFL draft coverage is powered by Manscaped! Get 20% off and free shipping on all their men’s grooming products, including the Ultra Premium Collection when you use promo code CHAT at https://manscaped.com/chat.

Travon Walker was the #1 pick in the 2022 NFL Draft as the Jaguars kicked things off. Aidan Hutchinson went to the Detroit Lions with the #2 pick while Kenny Pickett was the first quarterback off the board landing with the Steelers at pick #20. Malik Willis wasn’t taken until the 3rd round by the Tennessee Titans. Other notable draft prospects such as Kenneth Walker III, David Ojabo, Alec Pierce & Roger McCreary got selected in Round 2 of the NFL Draft.

If you love the NFL then make sure you SUBSCRIBE to Chat Sports now: http://www.youtube.com/chatsportstv?sub_confirmation=1

If you want more NFL news and rumors then check out our website: https://www.chatsports.com/nfl