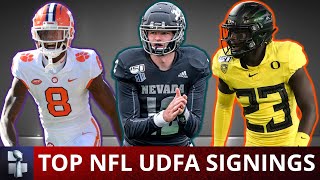 The 2022 NFL Draft is officially in the books, yet several big-name players went undrafted. NFL Draft prospects like Carson Strong, Justyn Ross, Christopher Allen, Abram Smith and Smoke Monday didn’t hear their name called, but still have a shot at making an NFL team as a UDFA. In today’s NFL Draft UDFA tracker video, Tom Downey takes a look at the top 20 undrafted free agents and where they have signed (IF they’ve signed). All 20 were Top 200 players on Tom’s big board.

NFL Draft coverage has been presented by Manscaped! Start using Manscaped if you want more success off the field? Then Get 20% off and free shipping on all their men’s grooming products when you use promo code CHAT at https://www.manscaped.com/chat.

Carson Strong went undrafted, likely due to medical issues. There’s normally one of few reasons why notable players go undrafted: medical and off-the-field. Sometimes, players aren’t as well-regarded by the NFL. And every year, some of those players end up as gems as UDFA signings.

Justyn Ross, as of filming, actually has not been signed. That’s a surprise, but that doesn’t mean he won’t get signed soon. Ross does have major medical red flags and some athletic questions, but it’s heartbreaking.

Answer today’s poll questions in the COMMENTS:
Who is your #1 UDFA signing?
Who will sign Justyn Ross?
Who had the best UDFA class? (You can just pick your favorite team!)
What other UDFAs did I leave off?

Looking for where a UDFA ranked on Tom’s Big Board? Check it out here: https://www.chatsports.com/nfl/a/2022-nfl-draft-prospect-rankings-final-big-board-42679

NFL Daily is also on Rumble! Support us over there for exclusive and uncensored videos: https://www.rumble.com/nfldaily

Looking for even more NFL UDFA coverage? Check out our website: https://www.chatsports.com/nfl/