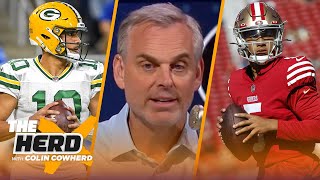 Trey Lance may have only played two series in the San Francisco 49ers preseason opener against the Green Bay Packers, but he made those plays count. He finished 4 for 5 for 92 yards, threw a touch down, and hit a perfect 158.3 rating. Meanwhile Jordan Love struggled, and though he also had touchdowns under his belt, that came with three interceptions. Colin Cowherd weighs the performance of the two QBs, leading him to question Matt LaFleur’s effectiveness as a coach. Plus, Colin talks Kenny Pickett, who had a great showing with the Pittsburgh Steelers. Watch as he lays out that if he were Mike Tomlin, he might consider going with Pickett over Mitch Trubisky.